David Jones in conversation with Edward Stourton, discussing the jurisprudence of the European Court of Justice after Brexit, the lack of potential for a future EFTA model, and the nature of the negotiating document that sparked this debate. The original episode aired on 23 August … read the full article

Reopening of the promenade at Colwyn Bay

The following article was originally published in the North Wales Weekly News newspaper on 16 August 2017. As summers go, this one hasn’t been stellar. The early promise of a balmy May and early June has not translated into the barbecue weather … read the full article

The original episode of RTE Morning Ireland aired on 8 August 2017. David Jones in conversation with Gavin Jennings, discussing Brexit and what replaces the Customs Union between the UK and the Republic of Ireland and if there is a … read the full article

The original episode of BBC Radio Wales’ Sunday Supplement was originally aired on Sunday 6 August 2017. David Jones in conversation with Vaughan Roderick discussing the General Election, new voters, and the use of social media.

Denbighshire residents can drop into the Openreach surgery between 13:30 and 14:30 in the Naylor Leyland Centre, Ruthin on Thursday 10 August, to pose questions and ask about their broadband options. If you would like to attend please contact openreachcymru@grayling.com and include … read the full article 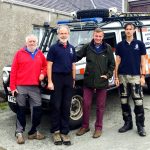 This article was originally published in the North Wales Weekly News on 2nd August 2017.   As anyone who has recently tried driving on the A55 will confirm, the holiday season is in full swing. Holidaymakers from all over the … read the full article