They Shall Not Grow Old

This article was originally published in the North Wales Weekly News on 24 October 2018. We are in the approach to Remembrance Day, which this year falls precisely on the hundredth anniversary of the end of World War I.  The … read the full article 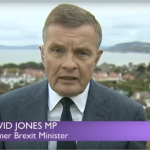 My appointment to the office of Minister of State for Europe happened in somewhat unorthodox circumstances. It was not, I have to say, an office for which I had ever cherished any great ambition. I had always taken my place … read the full article

‘This is your decision. The Government will implement what you decide.‘

This article was originally published in the North Wales Weekly News on 10 October 2018. Parliament returned on Tuesday after the three-week conference recess, to begin a Christmas term that will be crucially important to the Brexit process. That process has … read the full article