David Jones MP in conversation with Adam Boulton and Tom Rayner of Sky News. Discussing the devolution of powers and the role of parliament after Brexit. This live interview originally aired 26 October 2017.

Into the maelstrom: William F Yates

This article was originally published in the North Wales Weekly News on 25 October 2017.  Last Saturday, in the company of several hundred others from Llandudno, Colwyn Bay and farther afield, I attended the opening of the new RNLI lifeboat station … read the full article

It is now time for the lion to show its teeth

This article was originally published in the Mail on Sunday on 22 October 2017. Just one roar from the British lion, as Boris Johnson would put it, and Angela Merkel and Co have started to buckle. Simply making it clear … read the full article

This article was originally published in The Sunday Telegraph on 15 October 2017. The latest round of EU withdrawal talks ended last Friday in a wholly predictable manner, with Michel Barnier, the EU negotiator, declaring that there had been insufficient … read the full article 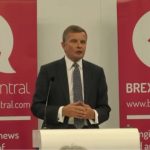 David speaking at the Brexit Central event at the Conservative Conference 2017, celebrating Brexit as “the most significant, exciting and the most important political moment of my life” 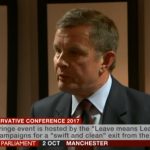 David speaking at the Leave Means Leave fringe event at the Conservative Conference 2017.

This article was originally published in the North Wales Weekly News on 8 October 2017.   Last Friday, at the end of a particularly trying political week, I attended afternoon assembly at Ysgol Pen y Bryn, Upper Colwyn Bay. It is … read the full article