To describe last week’s events in Parliament as historic is to understate their importance.  The European Union (Withdrawal) Bill was finally passed, after more than eleven months of debate. Despite the best efforts of the House of Lords and a … read the full article

The European Union (Withdrawal) Bill, which is approaching its final parliamentary stages this week, ought to be relatively uncontroversial. Its principal purpose is simply to repeal the European Communities Act 1972, the statute under which legislation emanating from Brussels passes … read the full article 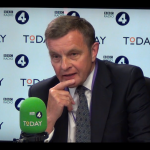 David Jones MP in conversation with  John Humphrys about UK terms of withdrawal from the European Union and why a customs arrangement would not work. This episode originally aired on 7 June 2018, you can listen to the full episode here.

If, as Genesis 1:26 informs us, God gave mankind dominion over all the earth, there must surely be weeping in Heaven.  We humans have treated our planet with shocking contempt, and nowhere is that more evident than in the devastation … read the full article