David Jones MP talks to the Telegraph’s Chief Political Correspondent Christopher Hope about leaving the EU on World Trade Organisation terms and a ‘no deal’ option. The original episode of Chopper’s Brexit Podcast aired 27 April 2018. You can listen to the … read the full article 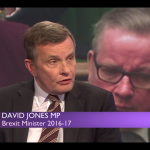 David Jones MP with Jo Coburn discussing the Windrush Generation, the Customs Union, and immigration. The original episode of Daily Politics aired on 26 April 2018. You can watch the full episode here.

This article was originally published in the North Wales Weekly News on 25 April 2018. Last week, London hosted the biennial Commonwealth Heads of Government Meeting.  It was by any standards a huge event.  The streets around the Commonwealth headquarters … read the full article

Bang goes Brexit if we fall for this customs con trick

This article was originally published in the Mail on Sunday on 22 April 2018.  So Brussels is determined to play hardball. That’s not necessarily a bad thing. If it means we can now press on and deliver a real Brexit, all well and … read the full article

This article was originally published in the North Wales Weekly News on 11 April 2018. Parliament is currently in recess, but the news cycle has not halted simply because of the absence of MPs from Westminster.  The fallout from the … read the full article