This article was originally published in the North Wales Weekly News on 28 February 2018.  All Weekly News readers will agree that ours is one of the best areas of the country in which to live.  We have some of … read the full article 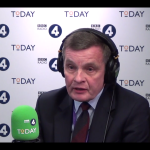 David Jones MP in conversation with  John Humphrys about UK terms of withdrawal from the European Union and EU proposals regarding the Irish Border that would effectively annex Northern Ireland. This episode originally aired on 28 February 2018, you can … read the full article