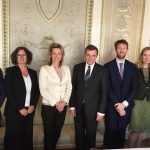 The following article was originally published in the North Wales Weekly News newspaper on 5 April 2017. Easter recess has come and gone since my last piece for the Weekly News. MPs routinely protest that recess is not a holiday – … read the full article

MP RESPONSE TO THE SNAP ELECTION

The Prime Minister has announced that an election will be held on 8 June, and that we will shortly take the necessary steps in Parliament to ensure that this can happen. The election has been called now as it is … read the full article

MP RESPONDS TO THE ATTACK ON WESTMINSTER

The following article was originally published in the North Wales Weekly News newspaper on 5 April 2017. For PC Keith Palmer, Wednesday 22 March, 2017, was expected to be a routine day on duty at the Palace of Westminster. Prime Minister’s … read the full article