David Jones MP in conversation with Oliver Hides about the Prime Minster’s Commons statement on the Salisbury incident. This episode originally aired on 15 March 2018, you can listen to the full episode here. 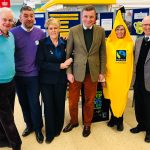 Fairtrade fortnight has just ended, and last Friday I went to support the event at Abergele, which is officially one of the few British Fairtrade towns.  Members of Abergele’s Fairtrade group – Rod Brocklehurst and David and Cathy Woodward – … read the full article

This article was first published on Conservative Home on 5 March 2018. By any measure, the Prime Minister’s speech at the Mansion House last Friday was a remarkable achievement. In my book, it was the best she has made, better even … read the full article

The Government needs to spend money now on post-Brexit preparations, deal or no deal

This article was first published on BrexitCentral on 1 March 2018.  The lack of realism displayed by the European Commission in the draft Withdrawal Agreement it published on Wednesday was truly breathtaking.   Its solution to the problem of maintaining an open … read the full article